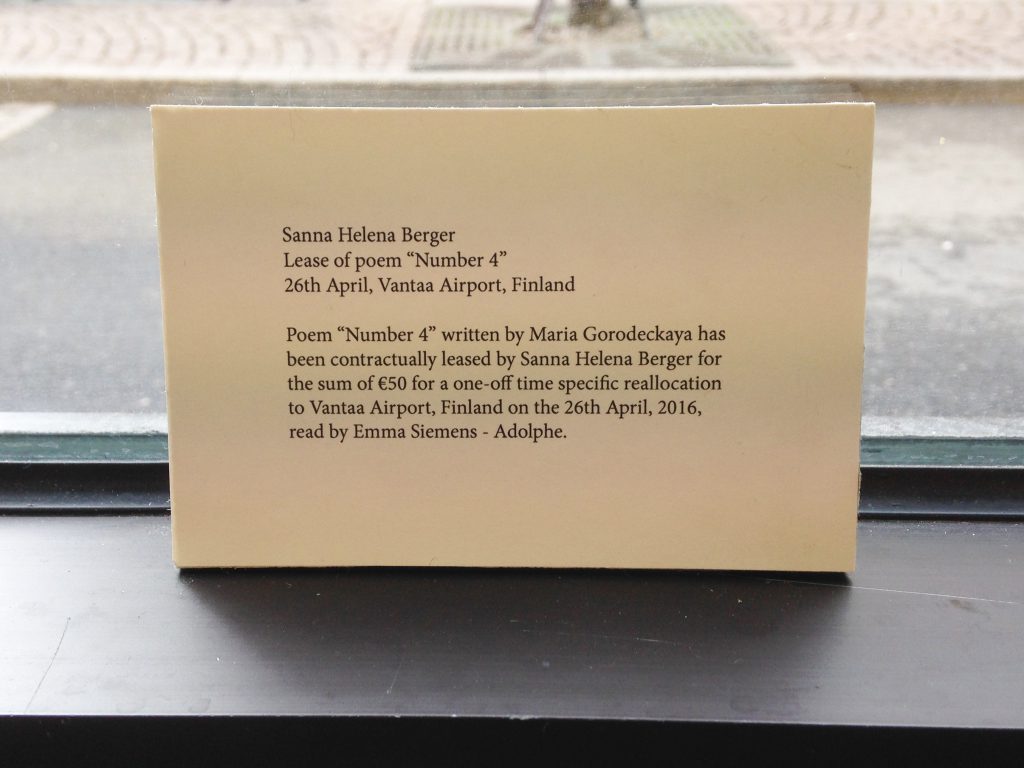 Plaque representing separate lease agreement signed by myself, Maria Gorodeckaya, Emma Siemens – Adolphe and witness Hanna Laura Kaljo, co-founder of Jupiter Woods. The Lease agreement was drawn up as a contractual agreement in consideration to the leasing of Poem “Number 4”, a work by Maria Gorodeckaya leased as a time specific temporary intellectual property by Sanna Helena Berger, the work in its secondary state existing not only as poem but as temporary commodity; A rental. The contract stipulates a one-off leasing of Maria Gorodeckaya’s poem “Number 4“ which featured in the group show Resident / Longshore Drift curated by Jupiter Woods, London at Sorbus Galleria, Vaasankatu 15, 00500 Helsinki, Finland. Poem “Number 4” was re-read by Emma Siemens-Adolphe on Sanna Helena Berger’s request on Tuesday the 26th April 2016 between the hours of 2.30pm and 4.30pm at Vantaa Airport, Helsinki, Finland. The second reading took place outside of the gallery room where it was originally intended to be read and heard, instead, a public poem momentarily re-appropriated by the temporary artist-turned-collector Sanna Helena Berger, momentarily removing the author, the intended reader identity (male) and the intended audience (gallery). Value is not only then added in the form of a one off payment but also stripped from the poem as original – the action of relocation is the predominant act affixed to the work which turns the reading itself into a placeholder or artefact of the trade.